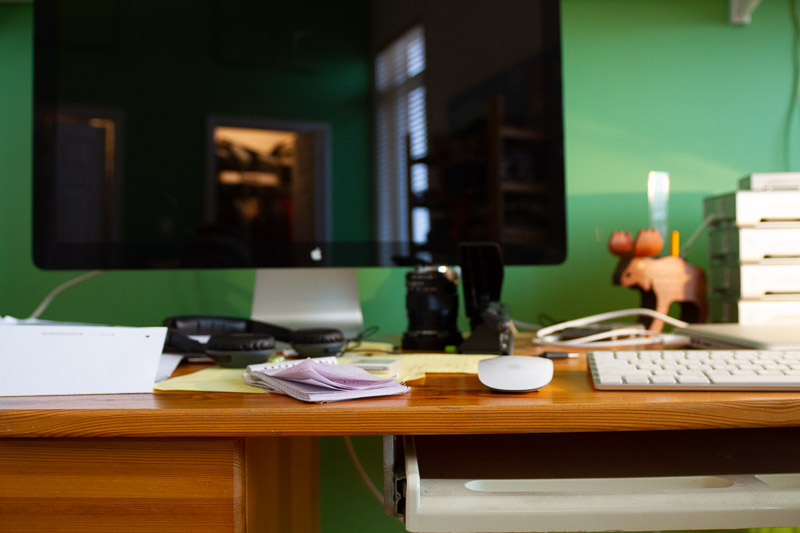 Even though I write a fair amount, I still feel a little helpless when I try to teach others how to do it. I’ve never found a manual that would make me a better writer and I don’t use one in class when I teach. Some of us encourage students to write outlines and begin with main ideas. That method has never worked well for me–I mean me the writer–so I’m not a very convincing salesman of the technique. Still, there are always a few moments during the semester when I feel like it’s my paid duty to share the secret of “how to write”. Sometimes I say what most of us usually say,  but I often end up resorting to analogies (to tennis, to sculpting, to scientific research) that to some degree attempt to capture and/or justify how I myself write.

Often the analogies I throw out are intended to convince the students that writing something good requires a lot of work and that it is a “process”, which they’ve heard before. Part of the process seems unspeakably cruel and heartbreaking. That part is cutting. There are probably nicer ways of putting it. You could focus on the positive and say you are choosing to keep sixty percent of your first draft, rather than cutting forty. “Winnowing” is a nice word too. So is “shaping”. But the word I usually use is “cut”. A few years ago I started to play with video cameras and editing software. There’s no film to cut, now that most things are shot digitally, but in the software the icon for “cutting” is still a sharp-looking blade. It looks dangerous, but it is an incredibly powerful creative tool.

In my experience, writing is a little like filmmaking. You might say that in both you shoot and you edit. When you make a film these two activities are very distinct. When you write, they blur together. As much as they might blur, my experience of writing is that I slide in and out of these two phases. In the first phase, which is analogous to shooting, I’m trying to get some good footage. The footage is sentences. During this phase I’m usually hunched over the keyboard, with one eye on the screen. I pay a lot of attention to what is going on in my head. I’m tempted to say that I withhold certain judgments. However, there are sentences which come to me that I reject before they are typed. This is not unlike filming. You see something and consider pressing record, but you do not. You wait, or you aim the camera in a different direction.

During the second phase of writing, which is analogous to editing a film, I sit back and look at the screen. I consider the footage, the sentences, and not where they came from. My footage of a beautiful spring afternoon may not be beautiful. It may be poorly shot, out of focus, over-exposed, cliché. If the footage isn’t good, you may have to reshoot. It feels like a waste of film, data, time and money, but even though you shot on a beautiful day, you didn’t get beautiful footage. This is where you’re tempted to give up. Give up writing, give up a photography hobby, sell your $2000 video camera on Kijiji (“like new”).

No analogies work perfectly. Re-writing and reshooting are not quite the same. Rewriting is often done by editing. You don’t erase the paragraph, but you substantially alter it. The closest thing in filmmaking is when the director says, “We’ll fix it in post,” and they use software to remove the blemishes, anachronisms and microphones. But what film editing and writing editing share, I think, is that you look at the footage coolly as if it is your raw material. You don’t put it in your final draft just because it exists, just because of the effort it took to get. It has to work in the final presentation. Not using all your footage hurts, but it’s probably a good sign when there are a few strong sentences left on the editing room floor. It might mean there’s even better stuff in the final version. It probably means you’ve made a tough decision. Writing and filmmaking are both full of tough decisions. If you’re making tough decisions, you’re probably doing something right. Sometimes I say that in class.

Unlike filmmaking, writing is lonely. When we give students a writing assignment, we are sentencing them to a few hours of solitary confinement. This could be an entirely new experience for them. This could in fact be the most challenging aspect of writing for some people. Not everyone works well independently. Other people like it. I like it, so it is hard for me to put myself in the shoes of someone who thrives on collaboration. Just writing this now, I realize this could be my huge blind spot as a writing teacher. I like filmmaking because you get to play with other people, but I also like an excuse to go into a room alone and think hard about something. I can’t imagine not welcoming that opportunity.

I said solitary confinement before. I’ve never experienced it, but I imagine the first thing you do when they put you in there is look out the window (if there is one), scream for help, try to contact your lawyer, launch appeals, request stays, play the harmonica. But just by being in the cell, you are not yet writing. You need to accept your fate and begin to shoot some footage, I mean write sentences.

I drew on my teaching experience writing that last paragraph. This is what I see when I give a writing assignment. Some students do everything but write. “I’m in the cell,” they seem to say, “but the essay’s not coming together.”

“What have you written?” I ask them.

“Just start writing,” I say with some misgiving.

The road to the thesis is long and you’re not there yet, I think to myself. You’re worrying about the dragon, but you haven’t left the castle. That’s an analogy for another day.

A thesis is a problem for the editing stage, in my humble opinion. First you need footage. The first bit of advice I got when I was making a film was one word: “coverage”. In other words, get a lot of footage of your subject. Leave yourself options and opportunities for the editing phase. In editing you shape the story, clarify your point of view, largely set the tone. Which part is more creative, more important, editing or shooting? I can never decide. How many writers have said, “Revising IS writing”?

The first time I do something that is complicated I am amazed by the complicatedness. The first time I edited a short film I kept stumbling upon what seemed like “problems”. I didn’t know if they were normal problems or just my problems. It has been reassuring and amusing to gradually discover that most of these problems are everybody’s problems, that they are the inherent challenges of filmmaking. For instance, a close up has better sound than a wide shot. When you cut from the wide shot to the close up, will the change in sound be audible to the audience? The first time I encountered this, not knowing it was a common issue, I was intimidated. I wondered if I should stick to one shot, or try to patch the clips together the best I could. Writing has similar and probably more difficult challenges that come with the territory. You know an idea is a bit of an aside, but it’s clever too. Do you slide it into the paragraph, put parentheses around it, stuff it in a footnote or chop it out? These are great problems for students to stumble onto.

Novice writers are like first time directors. They are going to make mistakes when shooting. This will become apparent when they edit, IF they edit. We shouldn’t let them give up to soon. Novice directors miss important shots–establishing shots, reaction shots–and they say “cut” way too soon. They don’t know this if they don’t sit down to edit the film. When they do, it dawns on them and then they cry. The event they filmed was a once in a lifetime happening, or if it was a fictional narrative, there’s no more money to pay the crew and the actors are now backpacking in Europe. Writers don’t have these problems (I have come to really appreciate this about writing). You are your own cast and crew. If you need pickup shots, you sit down and write them. Lucky you, but you do have to sit down and write them. As hard as it is to cut, it’s also hard to admit that you need more good footage.

From what I understand a lot of what you learn at film school is the process of making a film. It’s very logical and once you know it, relatively simple. This is the step with the camera, done by person x. This is the step with the editing suite, done by person y. In writing there’s one person–the writer–and one tool–words. It is next to impossible to break this task into steps and roles, but I hope it is somewhat enlightening to try to do so. Still, having written this much about film and writing, I am now painfully aware of the limitations of my analogy, but “writing isn’t math,” I tell my students. I mean, there’s not really a right answer to “get”. It’s always an attempt, an assay, an essay–as we’re all aware–in this case to crack open the writing process itself, which is closely related to one of the most enigmatic subjects there is: the phenomenon of so called “thought” and consciousness. Writing is a tool that allows us to tap into these mental faculties, refine and store them, so that they are ready to be shipped off to someone else, to light a flame, to– Pardon me, I feel another analogy coming on.